The other shapes of Stillness

The relationship that Miguel Huaman has built with the cultural expression of his historical tradition was born organically, without being previously planned, and completely from scratch. To be precise, it arose from an actual drawing. And if Leymebamba today is well familiar with the shapes, the colours and the fine details of its ancestors’ artefacts, it is simply thanks to his work.
This is his story. 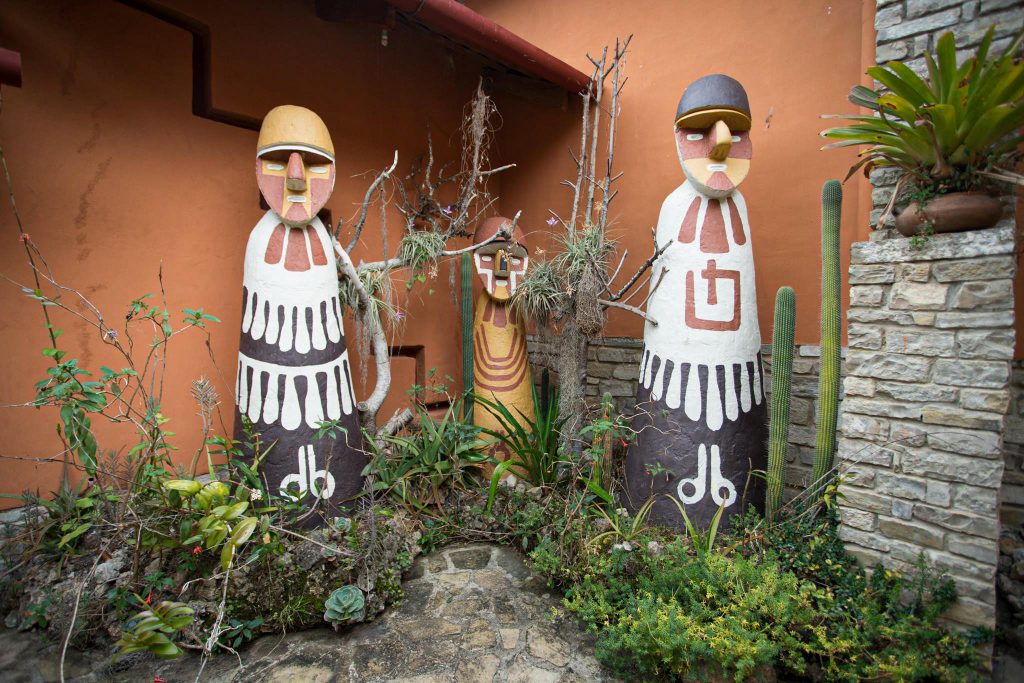 MIGUEL AND THE WOOD

One day, at twelve years of age, Miguel decided to follow his father’s example and start modelling the wood.

His father loved playing instruments such as the violin and drums, but he also enjoyed building the musical devices he played. Little Miguel wanted to learn from his father’s skills and started working on a teaspoon, but an unfortunate accident in the first step of his learning process made him change his mind. The pain from his wounded finger led him to promise to abandon all his illusions about turning that into a career. Working with wood was apparently not for him.

The scar is still visible, but the pain eventually dissolved. His will restored itself and, thankfully, the promise not to model the wood again was broken. 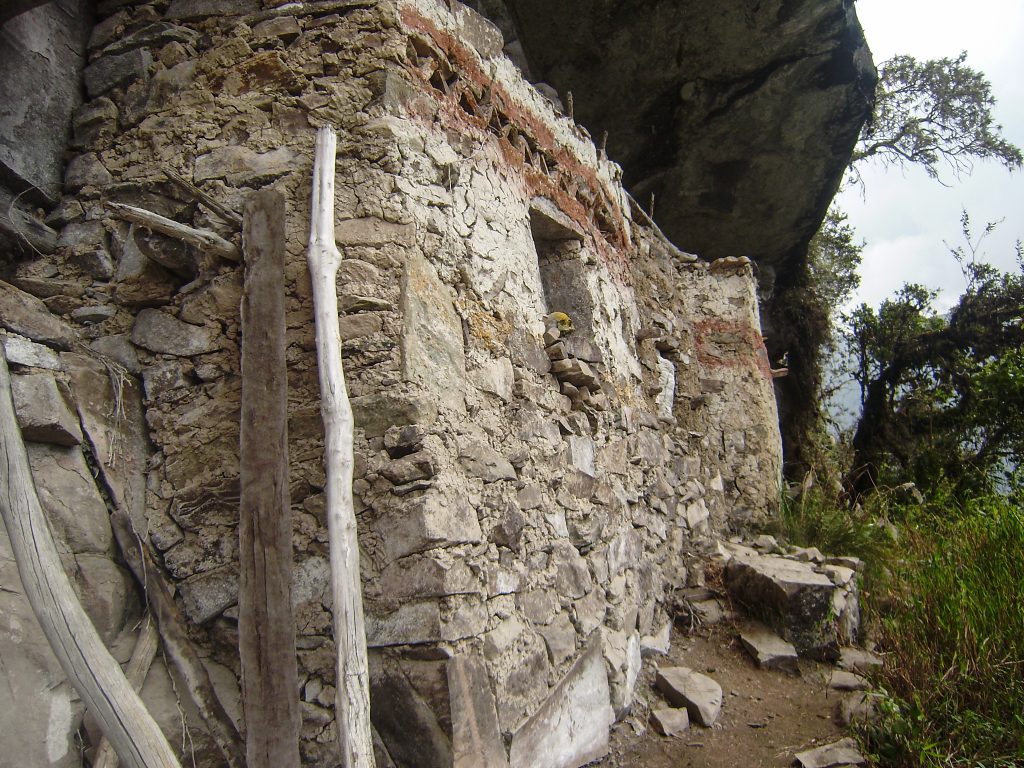 The Mausoleum at the Laguna de los Cóndores, where the mummies where discovered. Photo credits: Nuevos Caminos Travel

Years later, when the mummies were discovered next to the Laguna de los Cóndores, Miguel gained a job as an assistant at the site. He had the chance to observe the artefacts at close range, as well as the rescuing work. He remembers being extremely impressed by the tact and careful manners used by the archaeologist to dig the 500-year-old mummies found in the mausoleums. Somehow those valuable items raised from the earth The masks found in the mausoleums, with their peculiar caritas (little faces in Spanish), wanted to be looked at, and eventually convinced him to give the wood another chance to be modelled.

THE CARITAS – FROM THE EARTH TO THE PAPER, TO A NEW LIFE

He started to imagine reproducing the caritas. His wish became his will, and he started using the trunk of the helecho gigante tree to carve his first attempts. He kept trying and trying until the work satisfied him; he was learning steadily, but something in the process was missing. 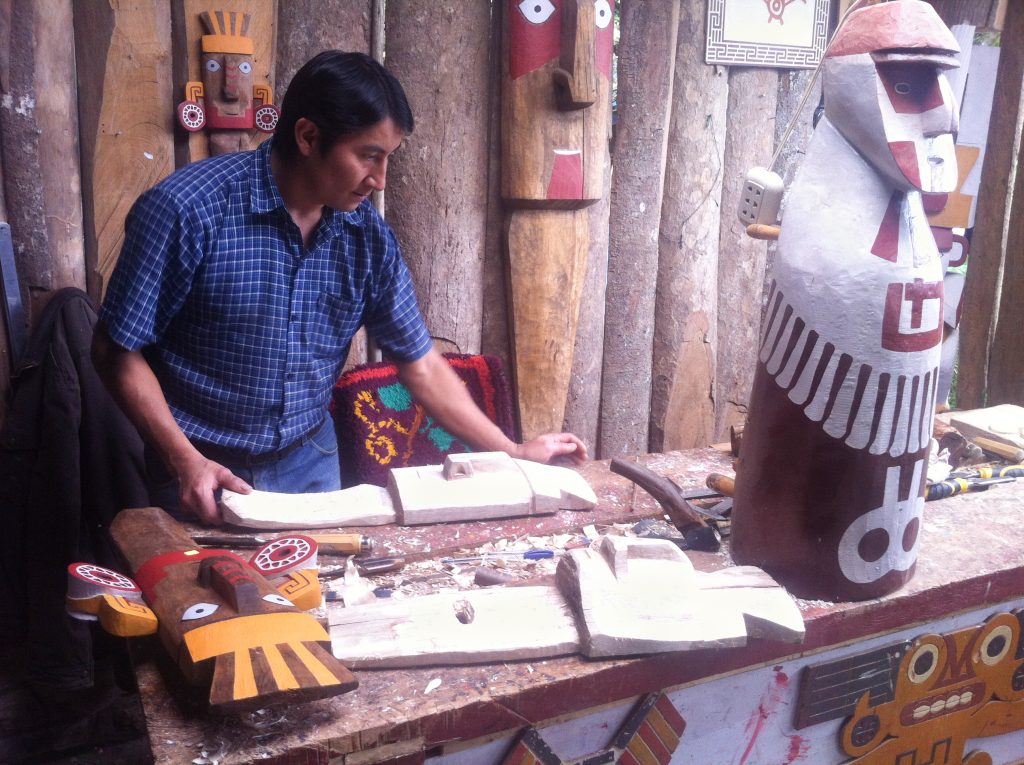 When the museum was inaugurated, in 2000, he gained a job there in maintenance. His mind and heart were still holding onto his dream, and his proximity to the findings created the perfect conditions.

He started spending more time at the museum after work to observe and study the Chachapoyas’ designs, until one day he went to work equipped with a notepad, a pencil and a ruler. That was the beginning. He used the ruler to measure the statues – measuring the noses, the head, the eyes, the details of the earrings, taking accurate notes on all the corners of the funerary findings.
The pages of his notepad registered his work and became the guide in his adventure in the conservation of Chachapoya culture.

The meticulous work he masters today started from still observation, and was inspired by his admiration of the archaeologists and the slow, attentive and accurate movements of their brushes, which they used like extensions of their hands, confidently stroking away layers of time to make the ancient shapes rise again.

Enchanted, Miguel observed every small twist of the tools used by these professionals of history, and felt inspired to imitate them.

It seems that it was not just the wood he was inspired by, but the whole process of returning a hidden treasure to the present.

He carried on his measurement work on his own, hidden for months in the rooms of the museum in his own free time after work.

One day he took the courage to express his deepest wish to the people at the museum: he wanted to make replicas of the precious pieces conserved there. At first, they did not take him seriously, but when they saw his notes they could not believe their eyes. 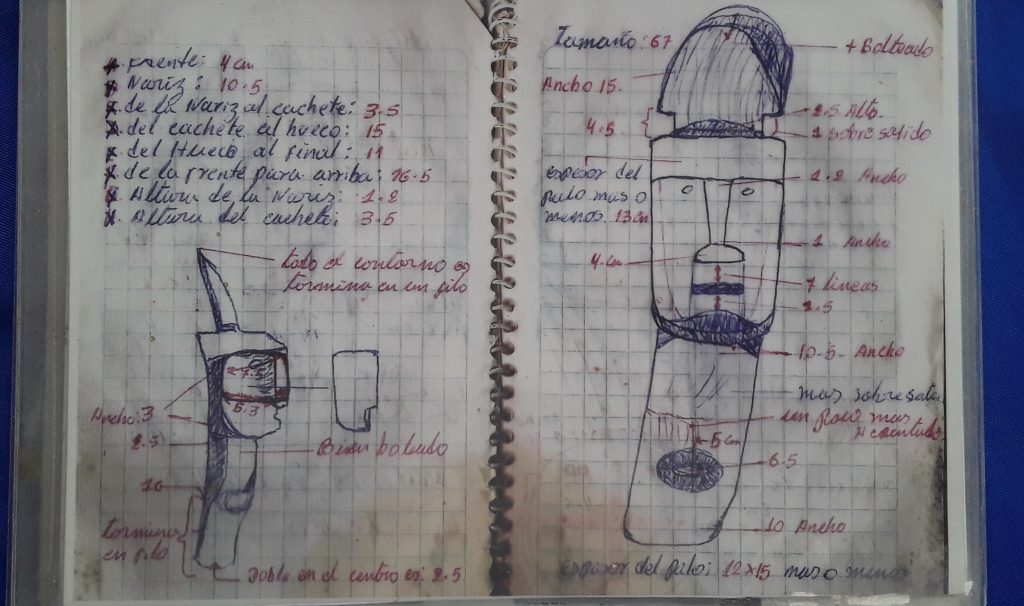 Pages of the Miguel’s original notepad.

The notepad – now a thick book full of drawings surrounded by numbers, arrows and busy notes – was displaying restless hours of dedicated work.

The path was ready.

They taught him how to scale the figures, and he started the carving process. Some replicas ended up on display in the museum. 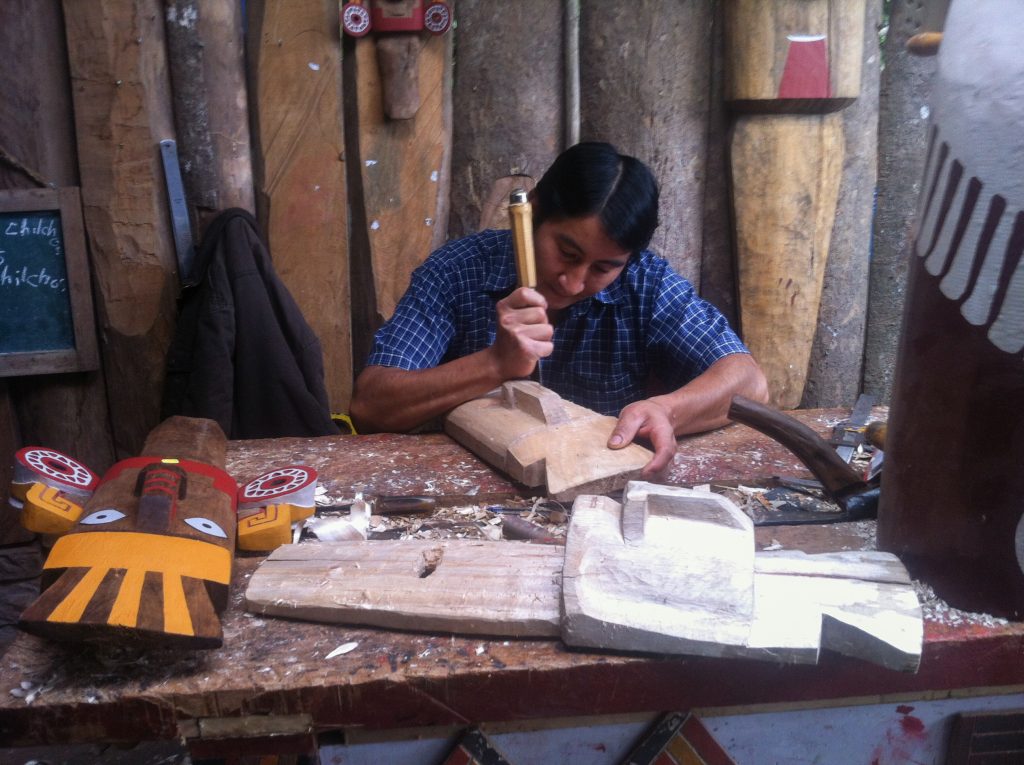 The first time a ‘gringo’ showed interest in buying a piece, Miguel was astonished: ‘Why would someone want to buy that? I could not get it.’ Prompted by his friends and colleagues, he agreed, but he had to put a dollar number on his piece, and he admitted, ‘It was really hard –

I had no idea how much I should charge for that.’

Today, after ten years, he can reproduce thirty-seven traditional original designs which he created himself, and his master book is used to teach his son and cousins, passing on some tricks he has learnt on the practice and the ancient indigenous art. 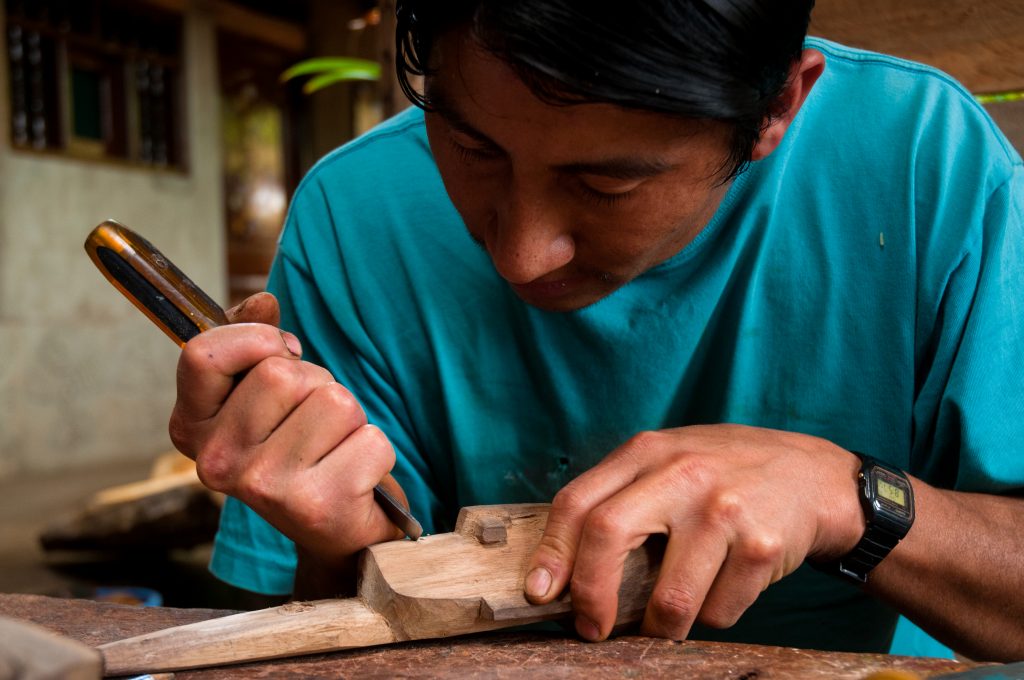 Miguel receives tourists in his studio. At the back of his shop he organises workshops during which the tourists learn the basic moves of carving and how to paint their own Chacha versions.

The colours Miguel uses to paint his work are obviously the traditional Chahapoya ones, but he confesses looking away with an embarrassed smile that the tourists love to add other colours to the typical red, yellow-ochre and white. ‘But it’s OK. Once they start painting it, that becomes their thing – it’s OK to use their own colours.’ Now even his eyes are smiling.
The workshops are an opportunity for the tourists to retrace the stages of their own learning process. ‘They simply love the moment they start colouring their own pieces, that they know they will take home with them at the end of the day.’ 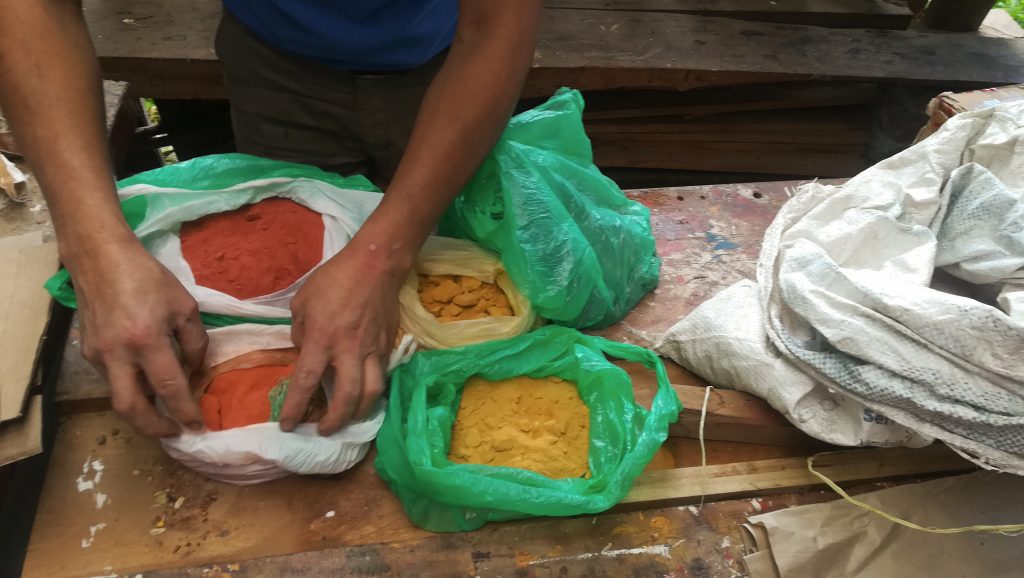 For a humble soul and a mind that is curious, anything can become an inspiration: ‘I learn from them too, you know. The way some of them paint, for example, they use different techniques from the ones I know, and I like to observe them expressing themselves and their own skills.

There is always a chance to learn from anyone,’ he adds. 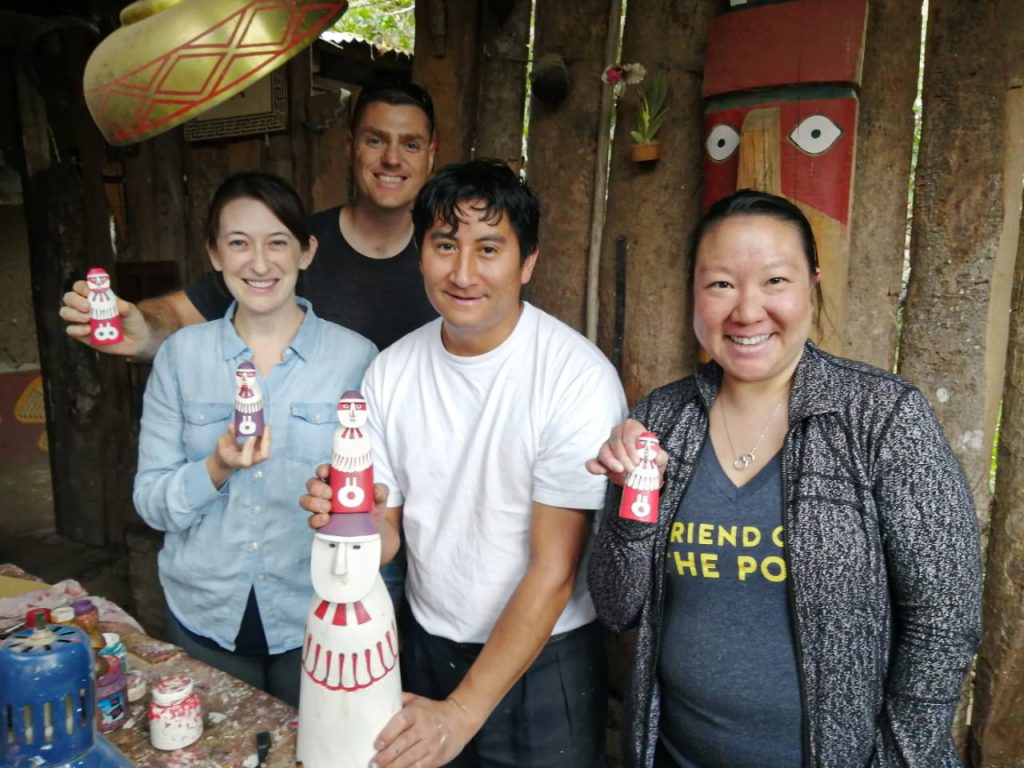 Amused, he admitted that when the tourists arrive at his shop, they are usually looking for an old man, a repository of the Chachapoya art of wood carving. They are surprised to find a relatively young person in front of them, and even more surprised when he tells them that he learnt his trade all on his own.

For him what he accomplished was natural: he did not have any grandiose goal in mind, he was just focusing on the moment, on the detail, on the curve of the nose or the way the orijeras were attached to each mask’s ear. 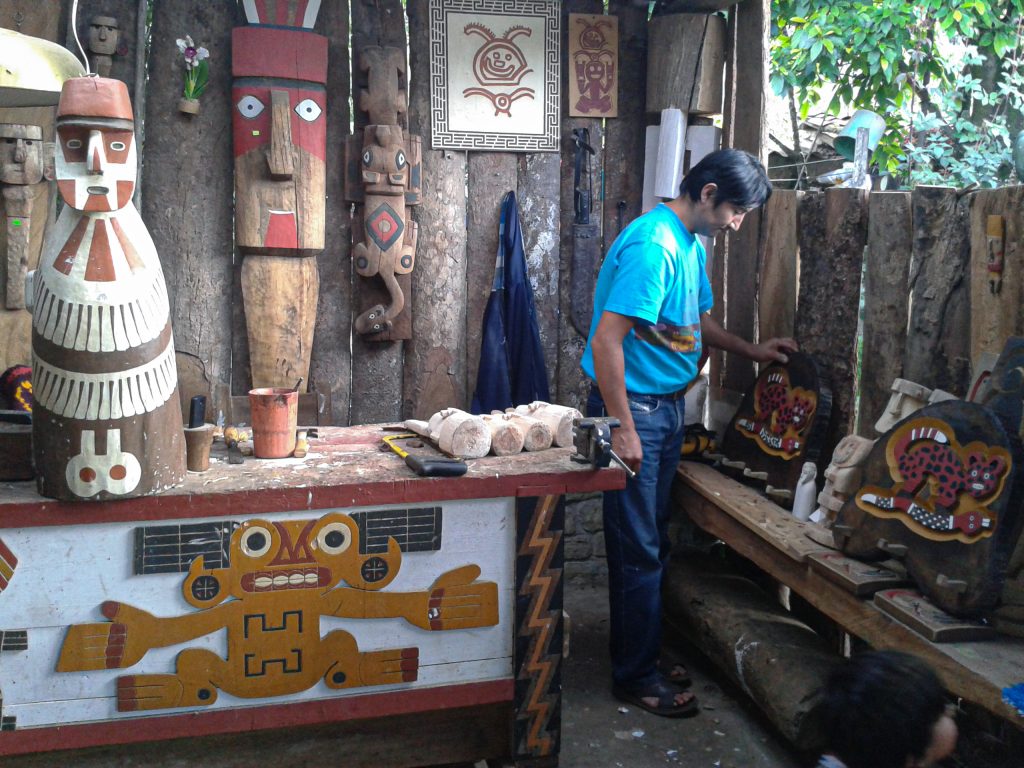 Talking to the reserved Miguel was not easy, making my role of anthropologist more intense than usual. I felt that this time I was more executing the role of an archaeologist, digging into the earth to get to the core of each fact he was narrating, understanding the reasons and prompting him to comment on it. It was a hard job, because everything Miguel has achieved is seen as normal and natural in his eyes, and he is still the quiet and shy assistant that was humbly observing the brushes moving.

Leymebamba presented me with a sealed box full of treasures. 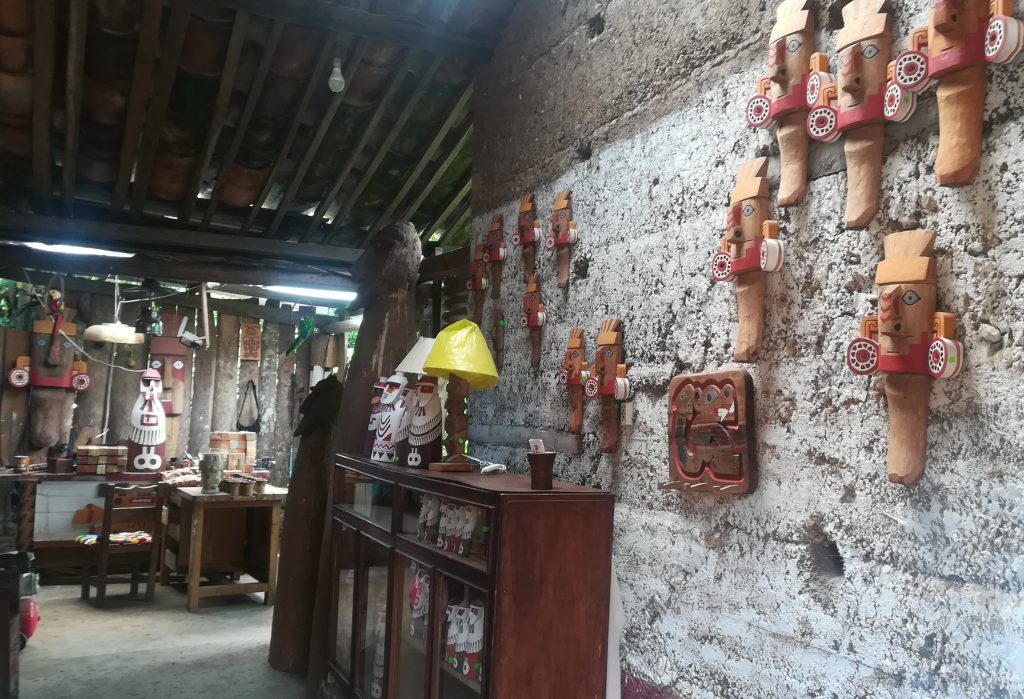 Miguel shared with me an episode which I think superbly describes the essence of his job.

One day, he went to one of the archaeologists and, pointing at the label describing a scene of an artefact, he had to correct the scientist: that was not a tuber that the figure was holding in his hand, it was a human head. The drawing was not perfectly clear, but Miguel had no doubts. He had seen those same traits in others places, and studied them for hours; to be able to transfer them onto his white papers using his pencil, he had only his eyes, his utter focus, and time.

The archaeologist was invited to compare that piece with others, and eventually was convinced by Miguel’s arguments and proofs; he told the museum to change the label on the glass showcase.
The time Miguel had spent on observations and the level of skill he had developed allowed him to discover details that could pass unnoticed, or be mistaken – like with the archaeologist’s tuber.

This episode talks to me about our role as tourists, and mine as a travel writer. To understand a culture, we need to watch from a close range, closer than we are used to doing most of the time, and for a moment we have to hold our breath to become completely immersed in the fine detail. I love that feeling of the unknown. It is stillness within movement. You are observing, and you are in the object. Only when you are still can you really listen, I believe. 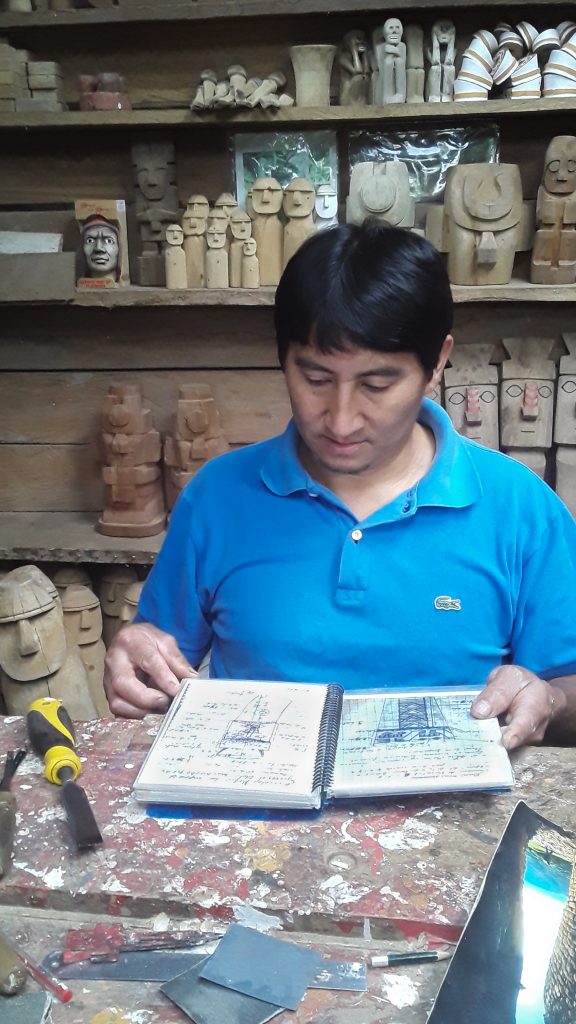 Miguel’s pieces are not just replicas of an ancient culture. They are the result of a pure and humble instinct, achieved with dedication and gifted by time and stillness.

At the end of our chat I watch Miguel at his desk, guarded by his mask. I smile back at him from my screen, I thank with sincere admiration the humble master of Leymebamba, surrounded by his coloured and evergreen dreams. 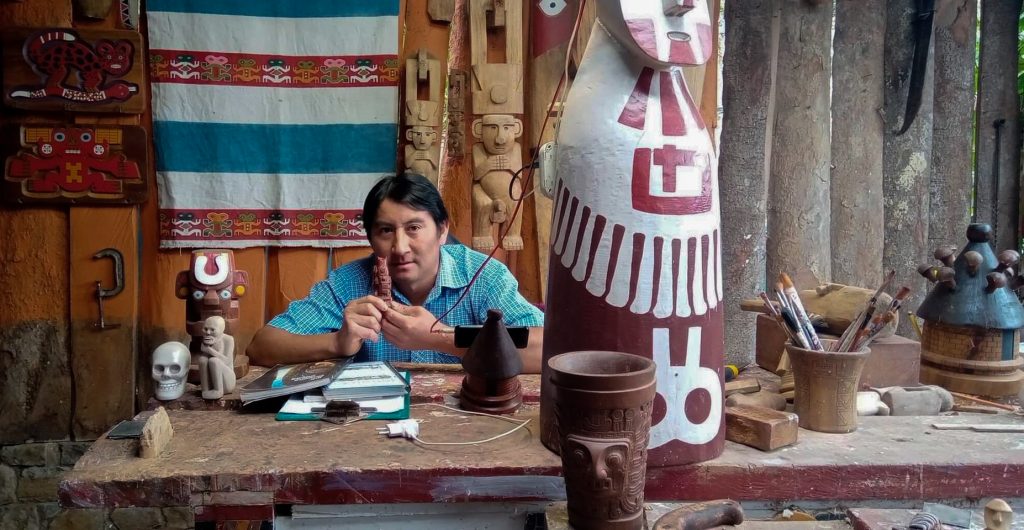 Miguel, in his studio, holding his reproduction of the Chacha musical instrument shown in the picture above.

An Alliance of the​ 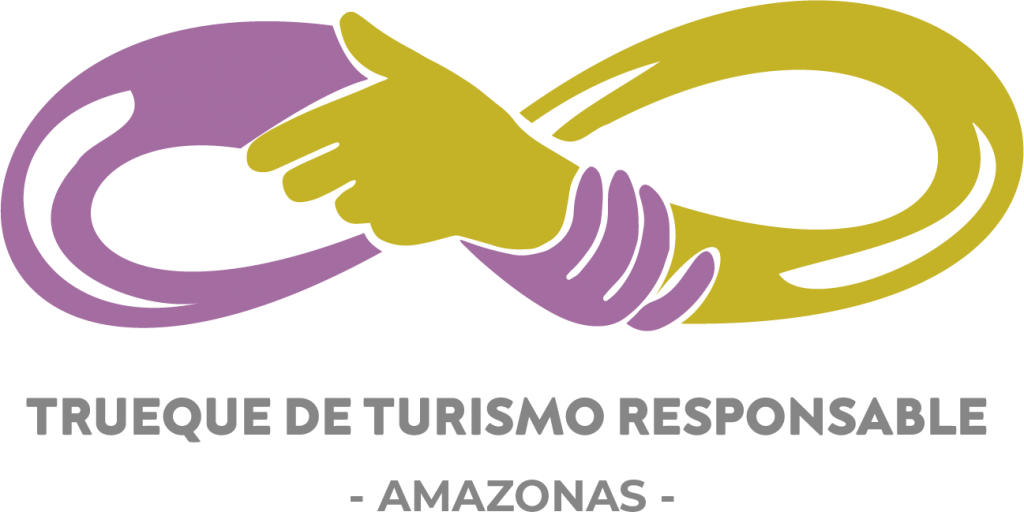 If you want to read more grassroots stories, check our Blog and sign up for our Newsletter.

Get in touch if you want to tell the stories of your local community.