The Sons of the Araucania – Part 1

The Araucania is a vast region, covered in the millennia old and picturesque monkey puzzle trees, which can rise over fifty metres above the other native plants and vegetation of the surrounding virgin forests. The araucaria is possibly the earth’s oldest living tree species, and is respected by the indigenous communities as a living part of their culture and history 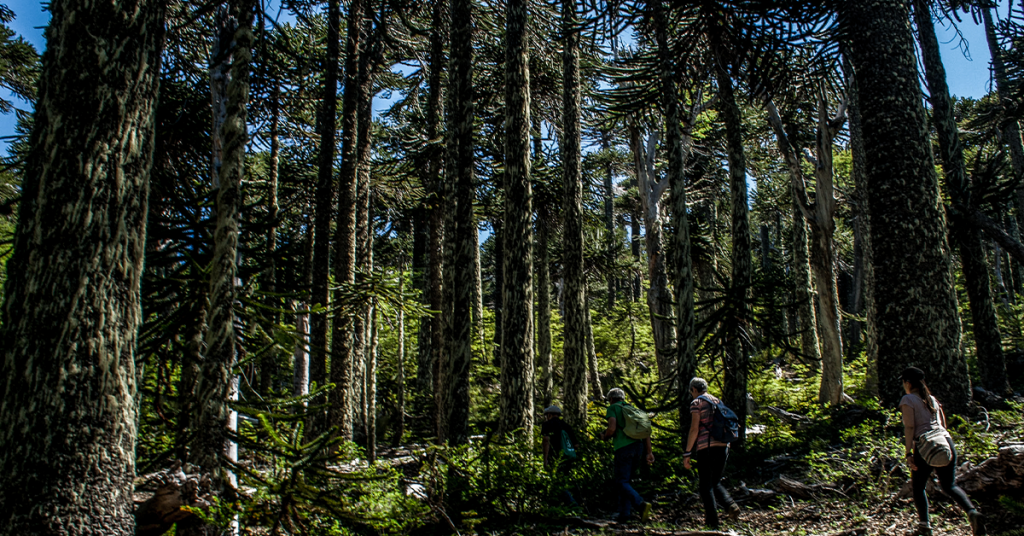 The Pehuenche, one of the eight territorial identities of the Mapuche ethnic group – the largest in Chile – derive their name directly from the monkey puzzle trees. In fact, Pehuén is the tree’s Mapudungun name. Officially, then, they are the people of the araucaria.

The region, not particularly famous among international tourists, has actually played a fundamental role in the history of the country, and its people are the fearless pre-Columbian protagonists of its tales.

Untamed and respected by the Inca, the Mapuche people lived for years in pacific cohabitation with the Spanish, from whom they gained appreciation after colonisation. The land south of the Bio Bio river was established as the frontier between the two ‘nations’. Their spirit of independence, strength and moral conduct have always been a source of inspiration for the people of Chile, a reference to which has even ended up in the first Chilean anthem.
The 1.5 million Mapuche that today live in Chile, and the 300,000 of them currently living in the Argentinian Patagonia, are structured into a broadly horizontal and decentralised society, always nourishing the ideal of the Wallmapu, a nation of nations. Their idea of utopia, in fact, is to build a world where many worlds cohabit peacefully – because talking about ‘nations’ is just reductive in the Mapuche context.

In the last 150 years, though, the land on which they have been living became disputed and their ancient agreement was denied, until very recently.

Since 1976 the araucaria tree has been acclaimed as a national natural monument. Unfortunately, this has not prevented its illegal exploitation, and the monetary value of its land has caused trouble, affecting the indigenous way of life.

For the Mapuche-Pehuenche the monkey puzzle tree feels like home. 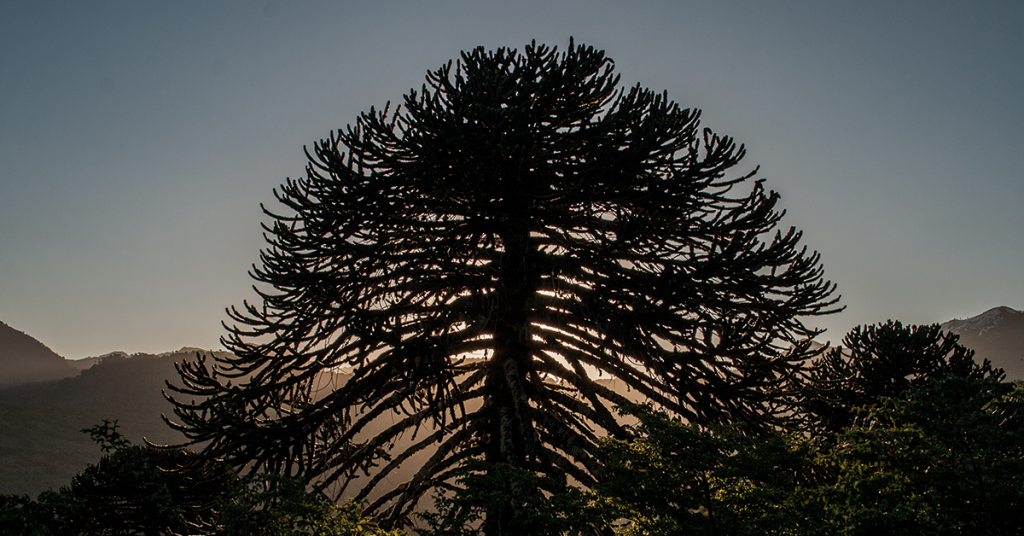 Joaquin Meliñir is a young link in this chain of ancestral history and culture. He has grown up listening to the stories of his grandparents, recalling the great-great-grandfathers’ life adventures. And if he has not experienced their field battles for himself, he has, though, been through legal and territorial fights to protect the land. He has always admired and found inspiration in the life example of his parents, who are moral and spiritual guides and pillars, not only for their family members, but also for their whole community.
I am grateful to Juan Marambio, co-founder of Travolution, for the opportunity and the honour to chat with Joaquin, the son of Ricardo and Paulina, respectively the Lonko and the Piancuse, the two highest ancestral authorities of the Quinquen community. 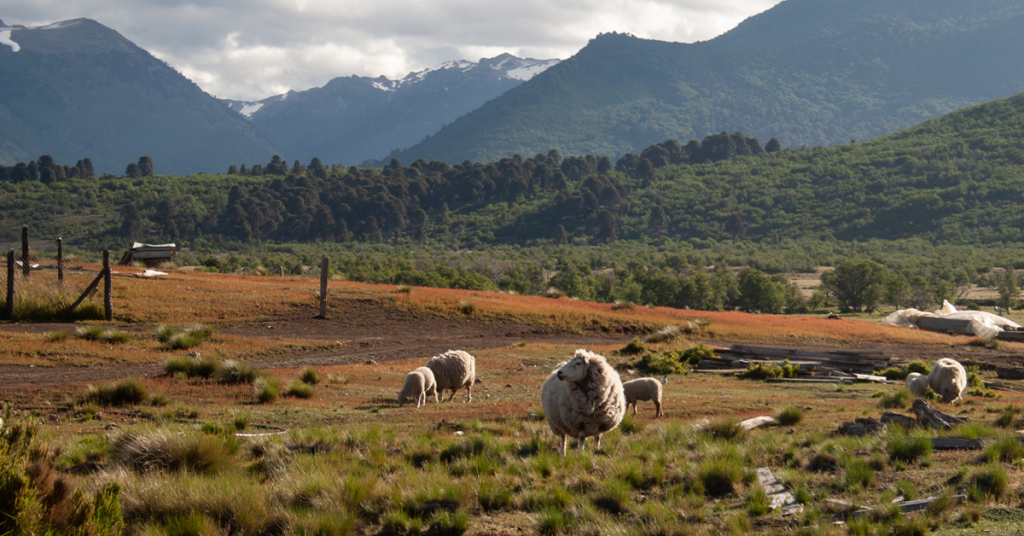 In a region flourishing in water and verdant vegetation, where the blue of the rivers and lakes punctuates the green of the woods, and the highest volcanoes on the planet rise elegantly over them, Quinquen lies quietly in the heart of one of these hidden valleys.

Joaquin has warm and beautiful memories of his childhood, spent in symbiotic relationship with his surroundings, playing with his six siblings and hunting hares with his father. There was no electricity, when he was young, but it was not missed. Nature was all around them and they were completely immersed in it. Happily satisfied.

Man was not always able to live in this valley. The winter used to be extremely harsh here, with the snow reaching two to three metres in height, until the effects of climate change modified the landscape and allowed the use of the land for more than pastoralism during the summer months.

This inaccessible territory served the needs of the Pehuenche in one of the recent moments of their troubled life. In the last century, after three centuries of peaceful cohabitation, the untamed indigenous tribes of the independent people’s nation were forced to make a transition, and they moved up to the high Cordillera where they found refuge from the national army. In these woods Quinquen was founded.
This story is told by the same name of the village. Quinquen, in fact, means ‘the place of refuge’ in the Mapuche native language. 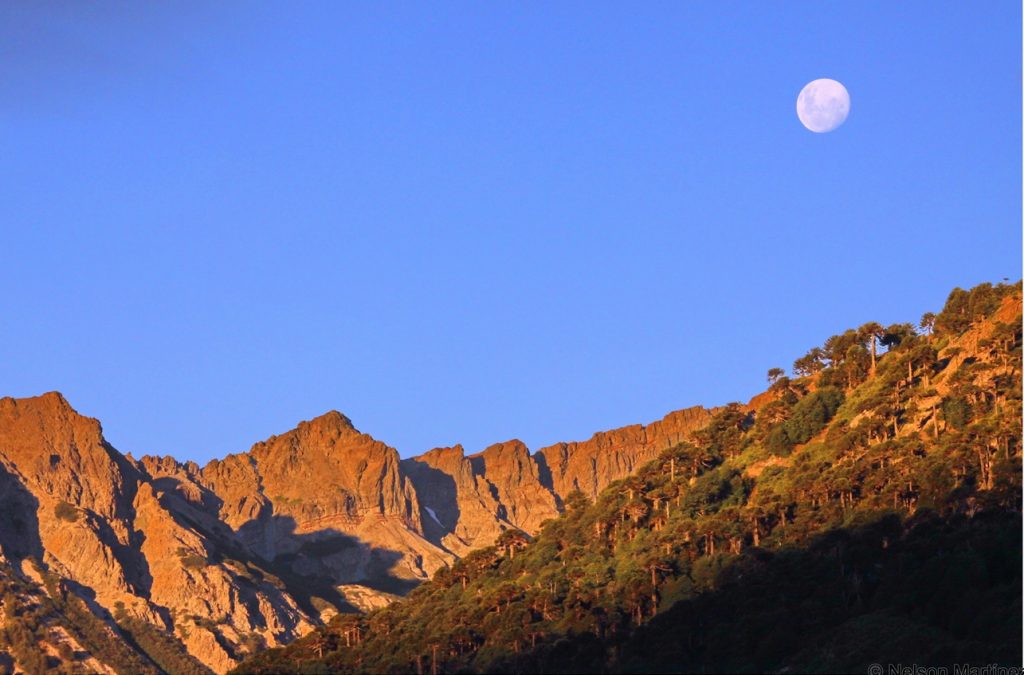 The feelings for these mountains, rivers and especially the trees is still carried within them, becoming a part of what they are. They have been growing as one with their surroundings, establishing that intimate relationship of synergy typical of native communities. But this goes beyond the traditional respect paid to itrofilmuñen, biodiversity.
The love and care for nature is fully embedded in the Mapuche culture and their way of life. They believe that we must live in permanent contact with nature and learn to cohabit with it.
We are not ‘owners’ of anything around us, according to them, we are simply part of it. 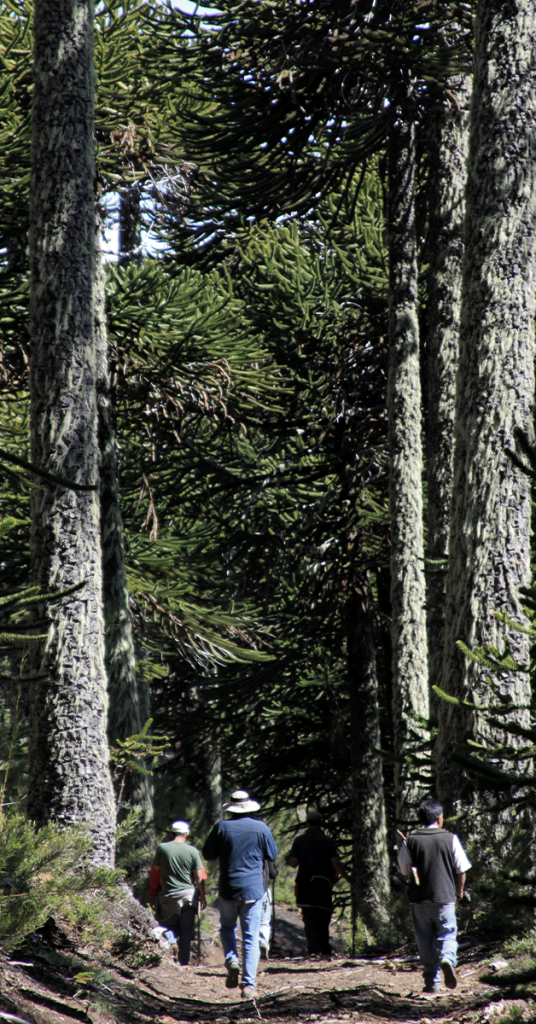 Since the beginning of the cohabitation with nature, Pewenque, the fruit of the araucaria – a big pine fruit called piñon in Spanish ­­– has represented the basic element of the diet of the nomadic indigenous group that established itself here.
Using the exact words of Joaquin: “the piñon was their salvation”. 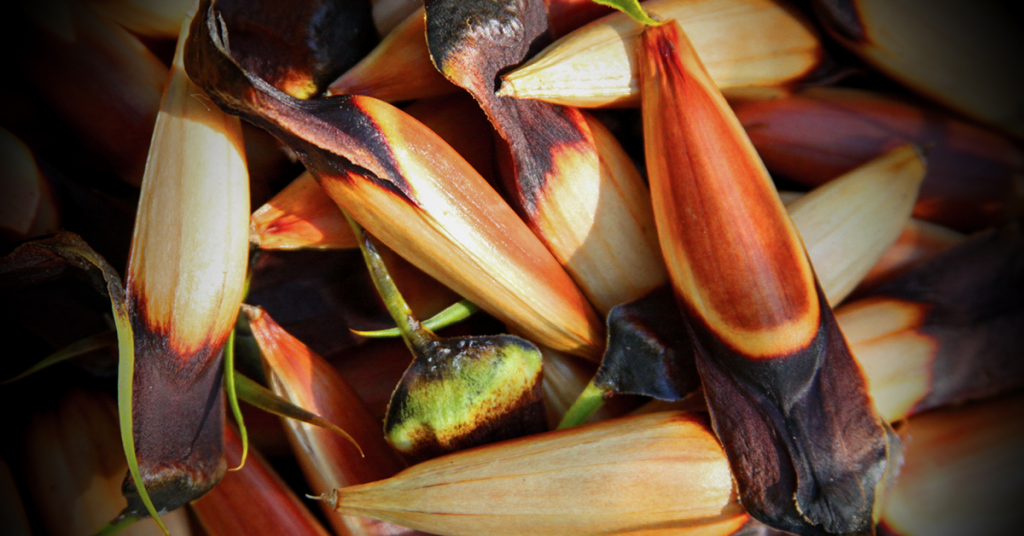 The creativity generated when humans are in survival mode and must adapt to a new environment provides us today with several different products derived from the pine fruit, which they also currently commercialise.

Among the various novelties that can challenge the tourists’ taste buds are pine fruit jam and the typical sopaipillas, a round deep-fried bread made of piñon flour, usually offered for lunch, but which can also appear on breakfast tables accompanied by morcela (black pudding), free-range eggs and fresh cow’s-milk cheese. And many visitors will be very much surprised to learn that the abundant mugs of local coffee they are tasting have been ground from the celebrated pine as well. 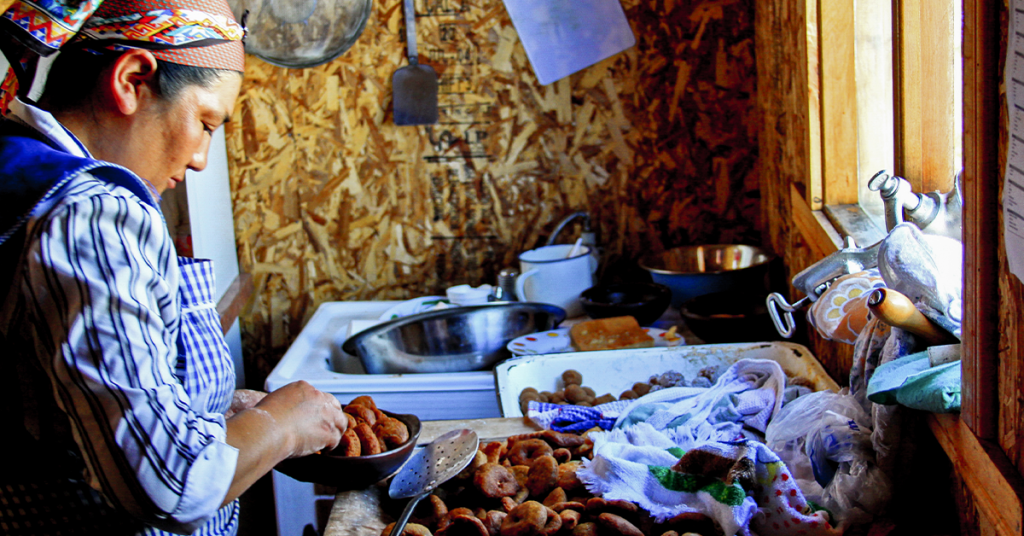 This fruit is the silent and proud representative of the life of our planet. It comes from trees which are around a thousand years old, and have provided sustenance to the Mapuche in a generous relationship of mutual protection and care.

From both a scenic and a naturalistic perspective, but also and foremost from a cultural angle, the piñon, and the whole tree it descends from, is the symbol of home in the region.

This fruit is even such an important part of the life of the local community that the best memories Joaquin has chosen to share with me come from activities linked to it.
The collection of bags of nuts is a traditional family activity for the Pehuenche, which can also be experienced by visitors if they arrive in the region during the austral autumn season (between March and April).
Joaquin admits that collecting the monkey puzzle tree’s fruits is not a difficult task, but he discloses that “the quantity is what makes the real difference”.
Their technique, perfected over centuries of practise, can only be admired and barely imitated at a much slower pace by the participating visitors. However, the fun part is retained even with a small bag of harvest. 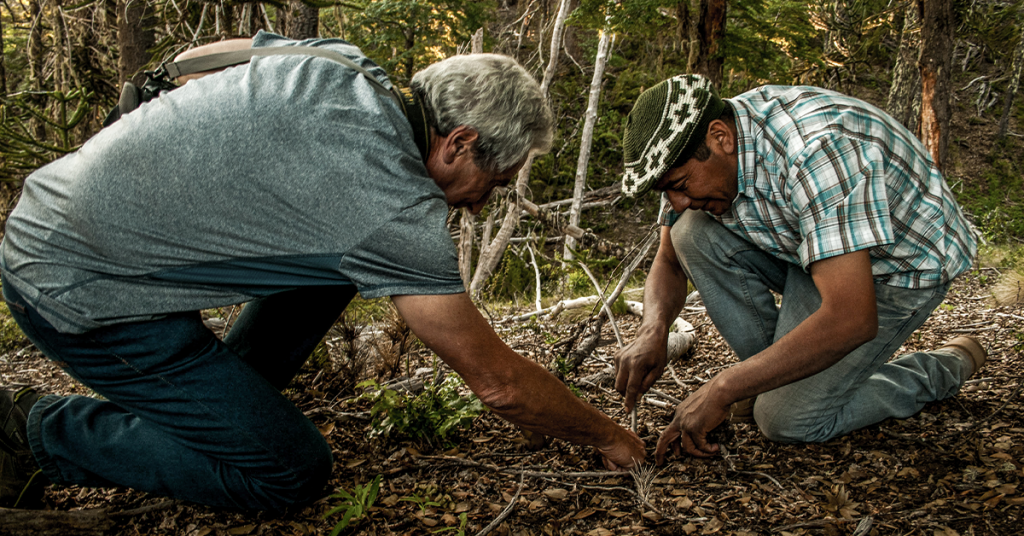 The gentleness, generosity and pure beauty of the people comes out in such close interactions, and, through tourism, can be encountered in these simple moments of ancestral memory.