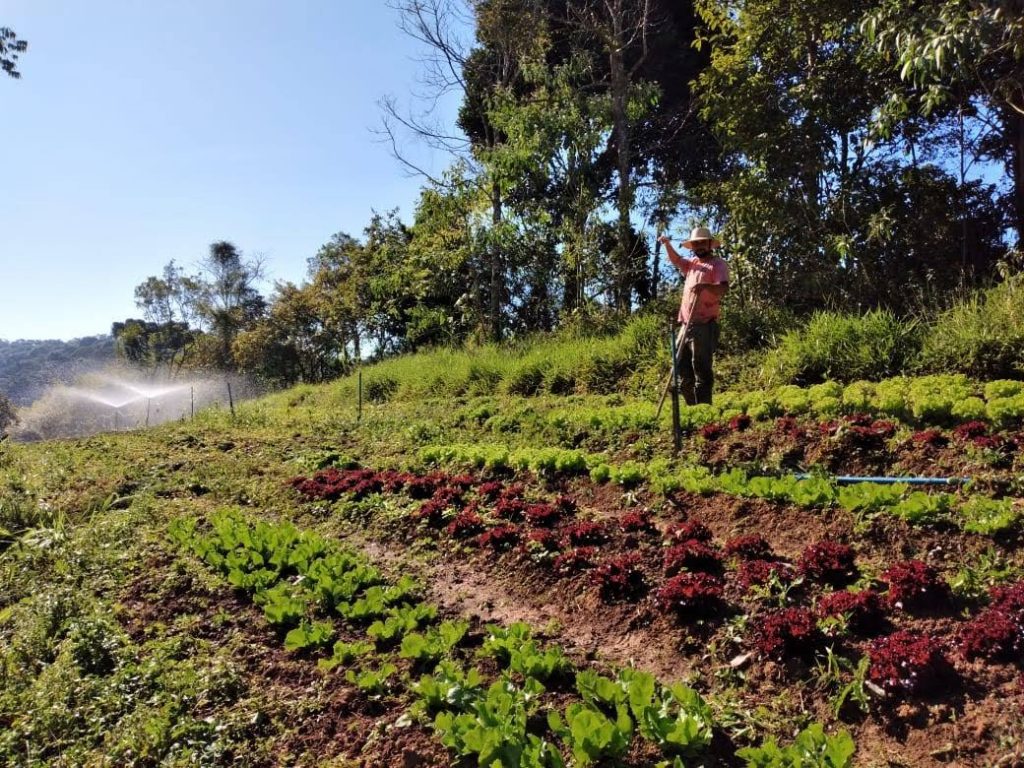 Eduardo Faria lives in Parelheiros, the extreme southern area of the biggest metropolis of Latin America but the rural look of his neighbourhood will disorient any new visitor. The thick forest of tarmac mushrooms – usually associated with the financial capital São Paulo- has been replaced by the very real Atlantic Forest and a low-density population. It is here that Eduardo has finally decided to move in 2018 with his 8-year-old son Jonas and his partner Kelly.
This is not at all a surprising move for Eduardo, since the smell of the fresh soil has accompanied his entire life.

The childhood memories of this maternal grandfather shouting “leite, leite” in the strong accent from Portugal on his daily return from his farm are still fresh in his mind, like the cow milk the grandpa used to carry with him while approaching his daughter’s house.
His paternal grandparents, on the other side, are Brazilian caipiras, from a rural area in the south of Minas Gerais State where they worked as meieros and allowed to keep half (meio in Portuguese) of all their production from a land they did not own. When he was 17 years old Eduardo’s father moved to São Paulo leaving the land and his family behind only to look for better life opportunities. He started working in carpentry and established his own business, but he always missed the caipira lifestyle. Many years later, in 1998, he bought his own allotment and although he did not need that for survival, he started growing corn, manioc, beans, pumpkin and looking after his chickens and other small animals. Little Eduardo always enjoyed helping him out with the farming tasks while listening to sertaneja music.
Differently than for his brother, the land has been the main source of income for his uncles, who raise horses and pigs, as well as for his untie who used to raise cows in Ponte do Soccorro – a peripheral area of the capital, 10 miles closer then Parelheiros to the city centre, where she used to sell milk and home grown vegetables.

Eduardo’s family, in a way or another, has a strong and direct bond with the rural and natural lifestyle, “but no one has ever been directly involved with agriculture for a commercial purpose. Only me” His words emphasised by the proud look that was sent to me through the screen. 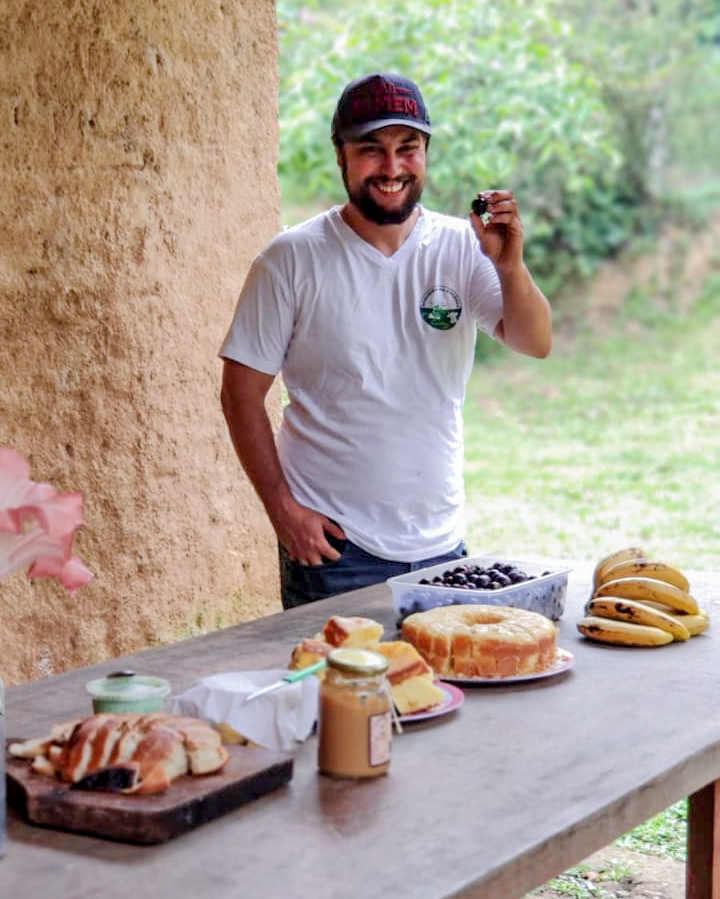 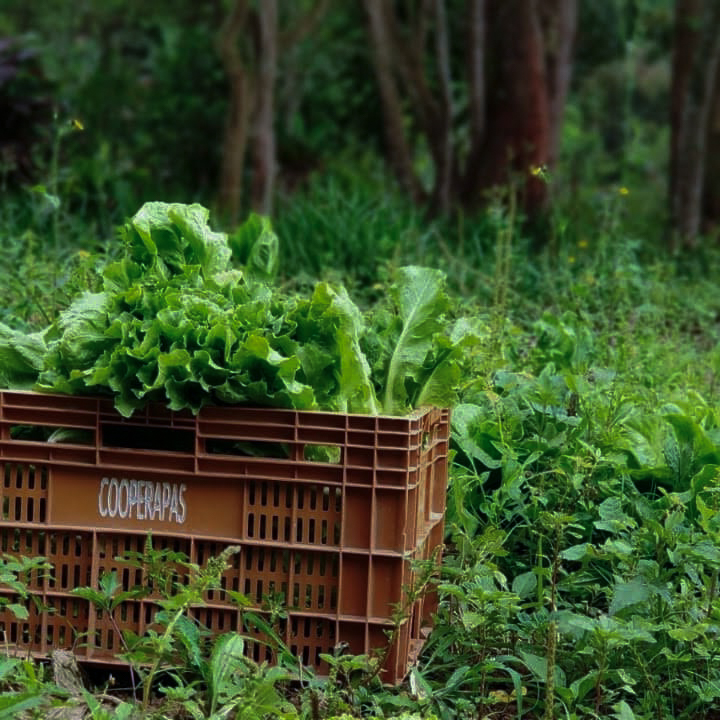 SURRENDERING TO THE EARTH

Regardless his passion for the land, Eduardo could not turn it into a commercial activity because not profitable, in fact, in the end of the 90s the organic production was not a concept yet valued by the consumers. The time was not ready for the organic revolution in the metropolis and the Paulistanos’ taste was still pretty polluted by the toxicity of the more competitive industrial production.

Young Eduardo started his professional path in the corporate world of the capital, but he ended up burning himself out working extenuating long hours. Until, one evening, after another inhuman work shift, completely drained, he took the bike and went for a ride to clear his mind. His life has lost meaning “I wasn’t happy” he confesses. “Life should be more than this” he told himself that night. Riding aimlessly in his neighbourhood in the total uncertainty of the future, a certainty raised:

“This is not working for me anymore”

He got back to the allotment that his father had bought in 1998 with an idea: “let’s plant some stuff and sell it, dad!”. In the first decade of the new century, the interest for the healthier and more sustainable organic production has started to interest the capital. His dream would have become real afterwards. It is not at all surprising that in a moment of big changes and new beginnings he turned to his emotional anchor: “because I have always felt good in the bush, after all”. 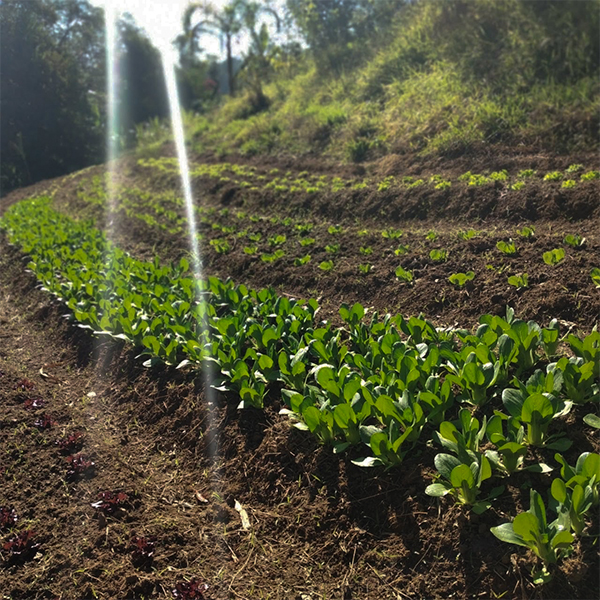 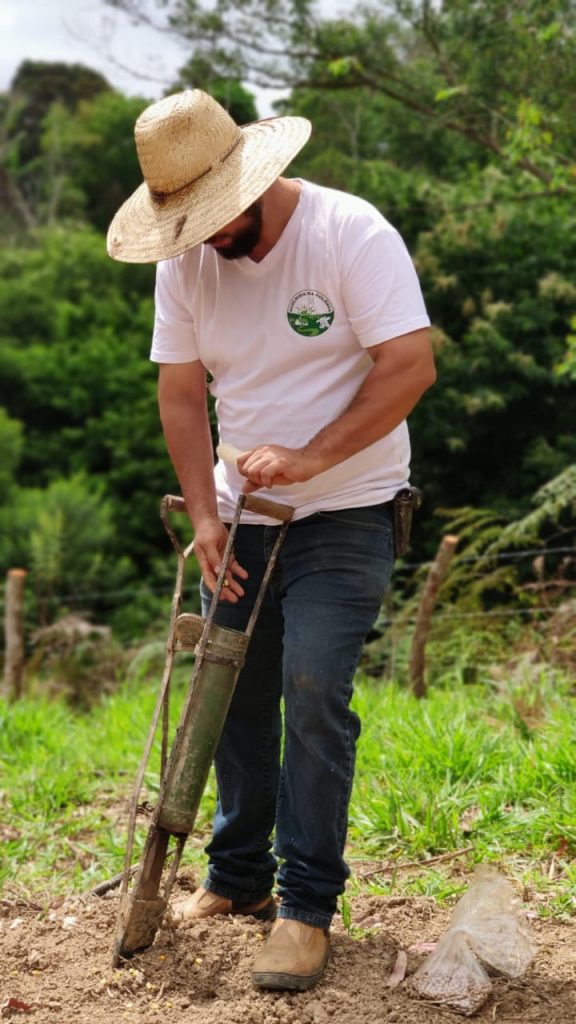 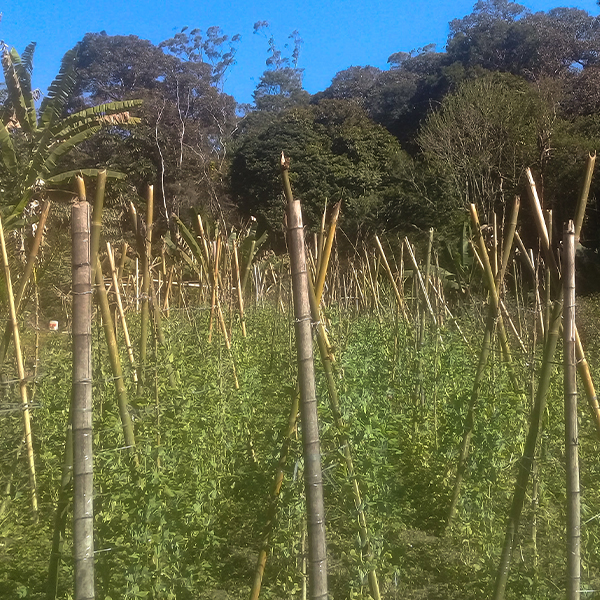 When asked to tell the activity he enjoys the most, he replies “the hard job” (o trabalho bruto), which he describes as the weeding and the preparation of the soil. He feels content when he sees the land becoming fluffly (“fofa”) for the action of the tobata (a small tractor commonly used in small property) or of the enxada, (the hoe), which he presents as the best friend of any farmer.
Making the soil soft and ready to receive the seeds might requires a strong physical job, but the enjoyment of seeing it green and organically fertilized instils softness and not hardness into my mind, especially because of the care (carinho) he is aware the soil needs and that he constantly provide to it.
I am fascinated by the nature of the so defined “hard job” that he enjoys so much: a physically demanding manual job which is delivered with an infinite kindness.

“First and foremost, we are farmers”

Eduardo likes to emphasise resolutely, “because sometimes the tourists forget it”, he smiles.

When he started receiving tourists in his property, some of his friends recommended him to build a swimming pool, create some cemented paths for the tourists feel comfortable. “Brazilian tourists are used to a certain product, but, you see, that concept has nothing to do with what I wanted to build here”. Tourists most of the time just need to learn and understand other realities, unknown to them, and appreciate how tourism can bring different worlds in the exact same time and space. It is a work of education, in the first place, according to him. 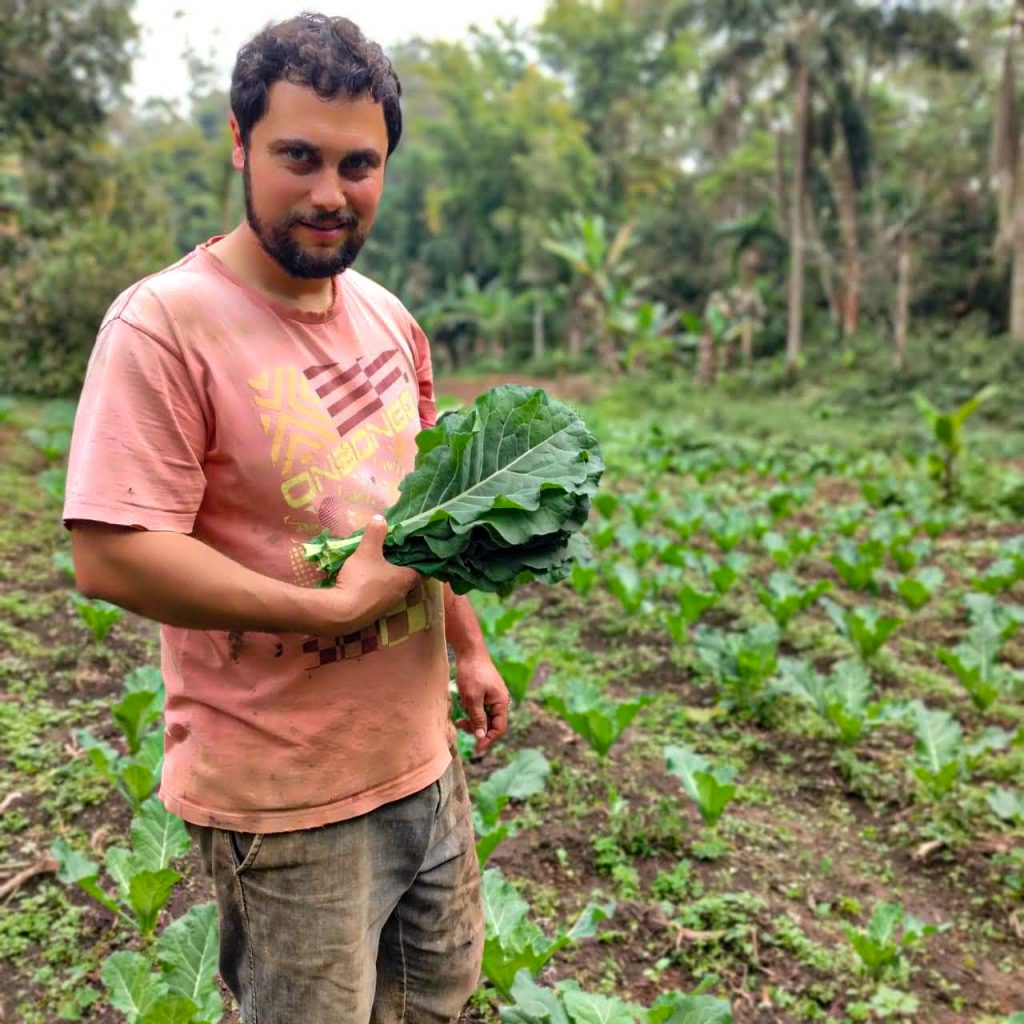 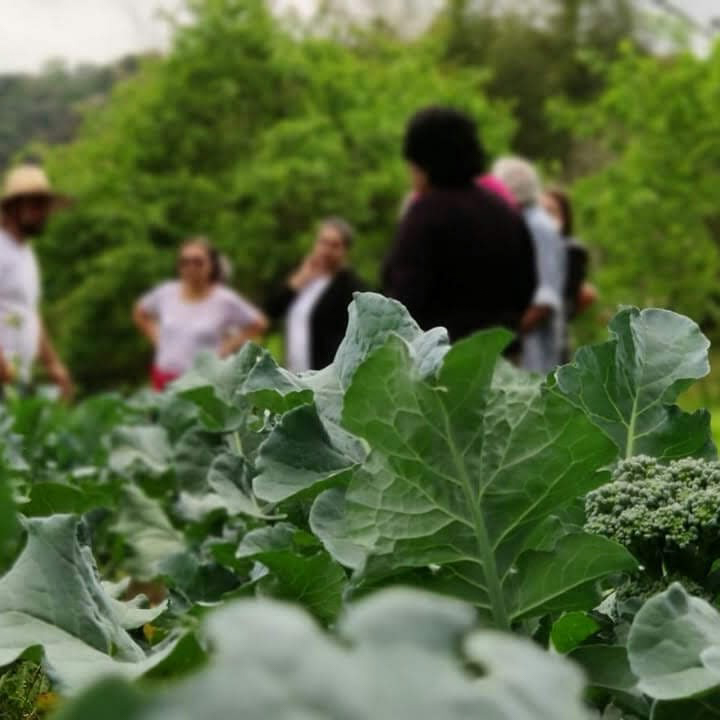 He admitted though that the tourists he receives here are aware to be temporary visitors in a fully functioning farm, which has its own routine and messiness. Undisputable signs of the ongoing daily routines are repeatedly left all around by the cows and the horses as a reminder. Nevertheless, he appears still slightly surprised to notice that his visitors love to experience the real farm lifestyle; “it makes me feel proud and gives me the strength to carry on with it”.

The visitors are, to a certain extent, already aligned with the values that have been cultivated here. This Community-Based Tourism project called  Acolhendo em Parelheiros  was born under the umbrella of the Acolhida na colonia project, whose main goal is the appreciation of the rural lifestyle and of the local farmers, not only as a socially respectable professional, but furthermore, as a very valuable one since it is the one dedicated to the organic and pesticide-free plantation.

The care for the land and the environment goes together with the care for the traditional farmer lifestyle and Acolhida has played a crucial role in the process.
The initiative works regularly with other local partners such as the NGO IBEAC to strengthen the support it provides in the preparation for the tourism activities and its commercialization.
Acolhida supports also the local Cooperapas –Agroecological Cooperative of Rural and Clean Water Producers in the Southern Region of São Paulo- established in 2011, that helped Eduardo to start his own organic production in 2015 and of which he is the current President.

The initial goal of the Acolhida was to give the local farmers an additional income through tourism, to support them in a very tough time for their local organic production. However, over time the project has started investing in the approximation of the consumer to the producer, boosting the creation of new healthy habits not only for the consumers’ diet but also for the local economy, with the opportunity of direct trade of the products grown and prepared here.

Tourism has been the main tool, developed in collaboration with Araribá Turismo e Cultura through its educational approach that invests in the cross-cultural and experiential learning process at the grassroots level. 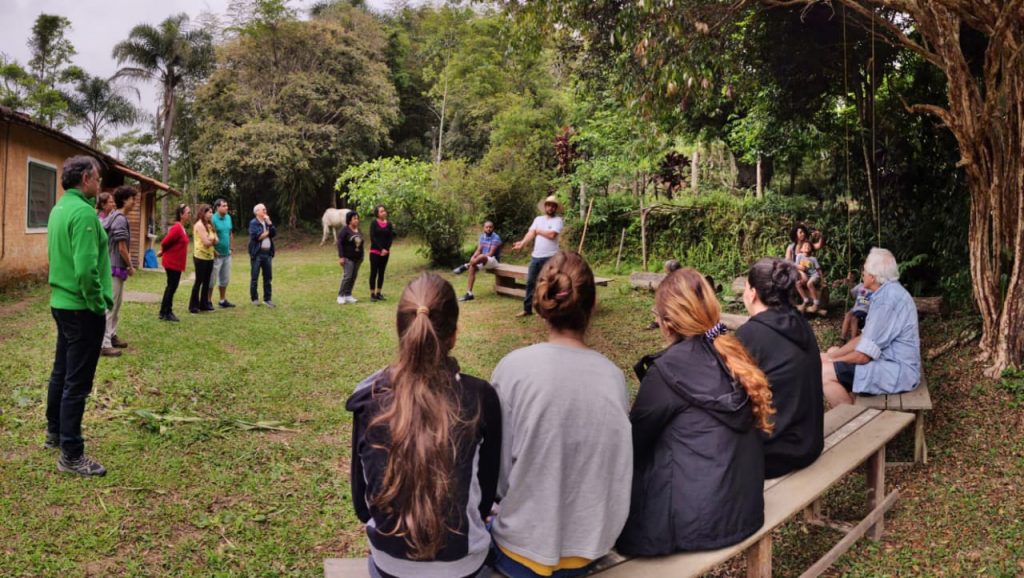 We are left to hope that the daily Copernican Revolution -here, as well as in other Community-Based Tourism experiences in Brazil- could expand and reach the “old style” national tourists, traditionally used to practise an alienating `sun and beach` tourism option and to eat pesticide-full crops. 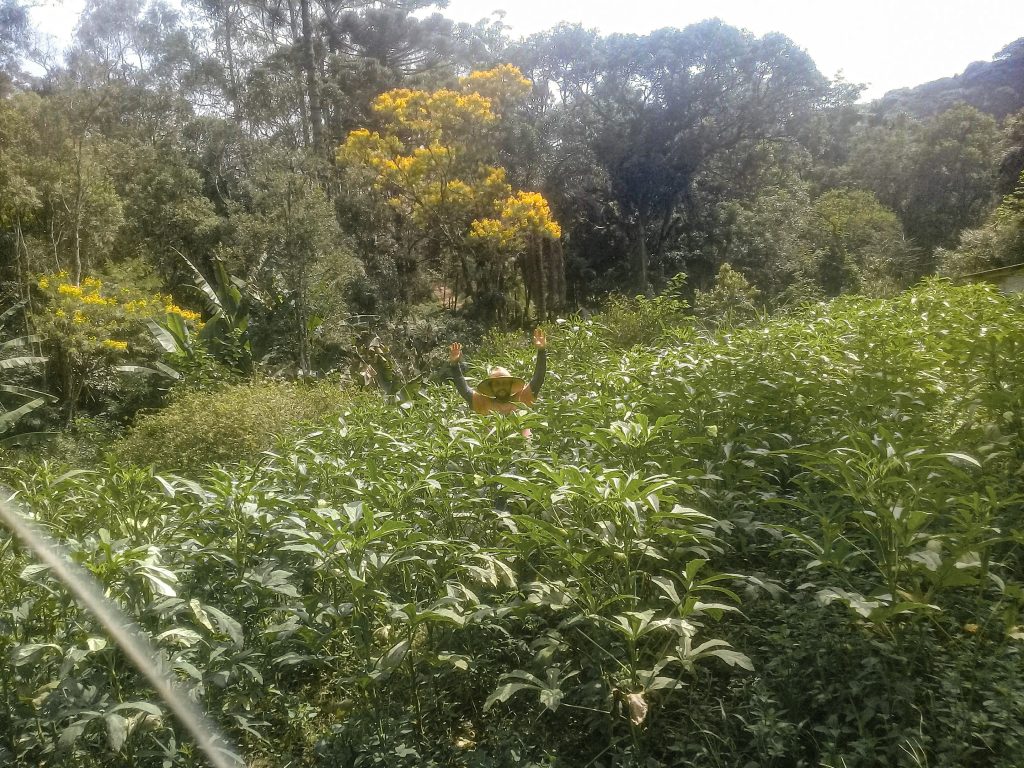 APPRECIATING THE INVISIBLE AND DISSOLVING THE STIGMAS

Students are Eduardo’s ideal tourists and he enjoys the pedagogical work he can do with them and their teachers, who often use the visit as an extension of the biology or chemistry classrooms.
However, the valuable and transformational work that he develops with children in general, become exponentially important to him with the pupils of the surrounding schools. “Growing in a socio-economic vulnerability, often in conflict situations” he explains “once they become tourists in their own neighbourhood, they have the chance to discover the natural beauty of their backyard, and they start to feel proud, rather than embarrassed to live here”.

Usually, what it is normal for a farmer can be a reason of astonishment for a visitor, and the astonishment can come from the surprise of the discovery as well as from memories.
Eduardo told me about the diverse reactions that the different age groups have during the visits. The elderly, for example, are so happy to get back in time, and often witness the replay of their own childhood and family life right in front of their eyes.

It must be really rewarding to hear the effect of the emotional memory through their animated comments: “I used to plant this back in the days”, or “my mother used to grow this veggie using the same technique”. Knowing that the visitors are having a good experience makes Eduardo happy because he knows: “I am giving them something special”. However, it still is the power of transformation of old stigmas through the experience itself what Eduardo is valuing the most: “The greatest value of the tourism is the appreciation of what we do here” he concludes. 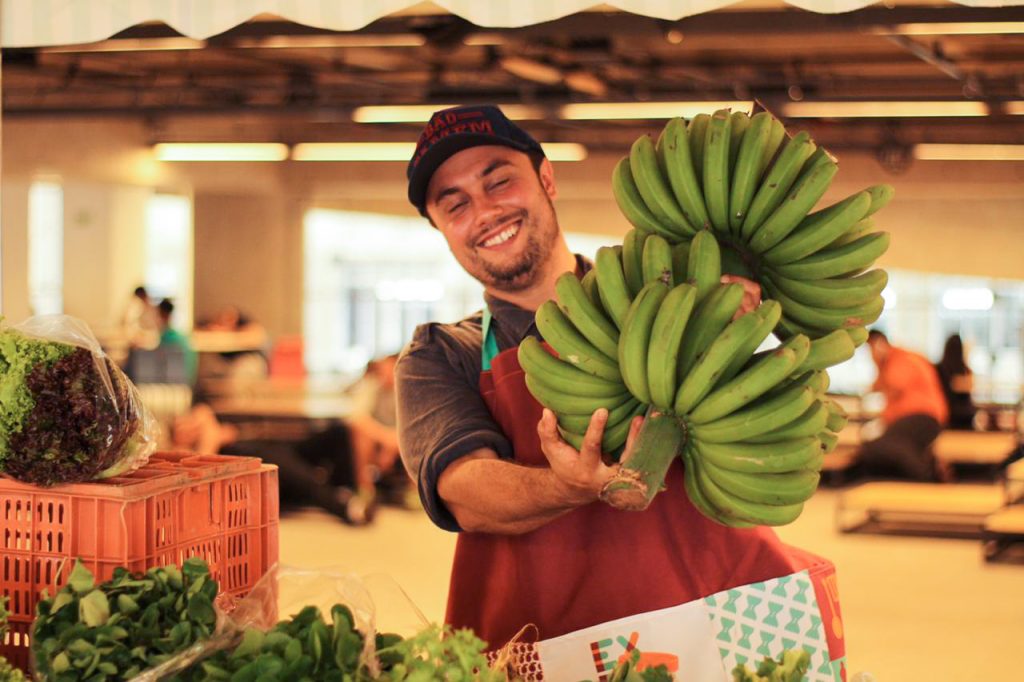 I totally hear and connect with Eduardo’s feeling that tourism brings the opportunity to shine a light on the invisible realities, traditionally cast aside through social stigma given by a glamourous society that rejects any kind of manual labour as a diminished version of work and a way of living that for long has been associated with poverty and marginalisation.
It is evident to me that together with his enxada, Eduardo is in the process of mastering the use of tourism as a powerful change-maker in people’s lives. I wonder how aware he is of this, in the flow of his passionate dedication and caring activities.

Sometimes, Eduardo goes for a stroll among the cultivated fields of his allotments after dinner. With the moon as his only companion, feeling content, he sights and think “if more people could see this”.

His pure enchantment with the rural life, with the nature and its elements has travelled through his DNA and has combined and united in him the different forms of loves that both generations of his bloodline have had for the earth. This enchantment has reached further because of the kind of tourism he practises here and the people he has, reached encountered and benefitted. Sometime in the form of a new scientific knowledge, some other times of a memory kind to their hearts, or a simply of a new transformational discovery, as in the case of the students of the FIS-FGV, story told in another journey of words. Moreover, it was touching to see that this enchantment that runs through Eduardo’s veins is today well visible in his son’s eyes too. While Eduardo and I were chatting on a video call to make this story alive, little Jonas started calling his father clearly excited about some important matter

“look dad, how beautiful is the orange moon tonight!” 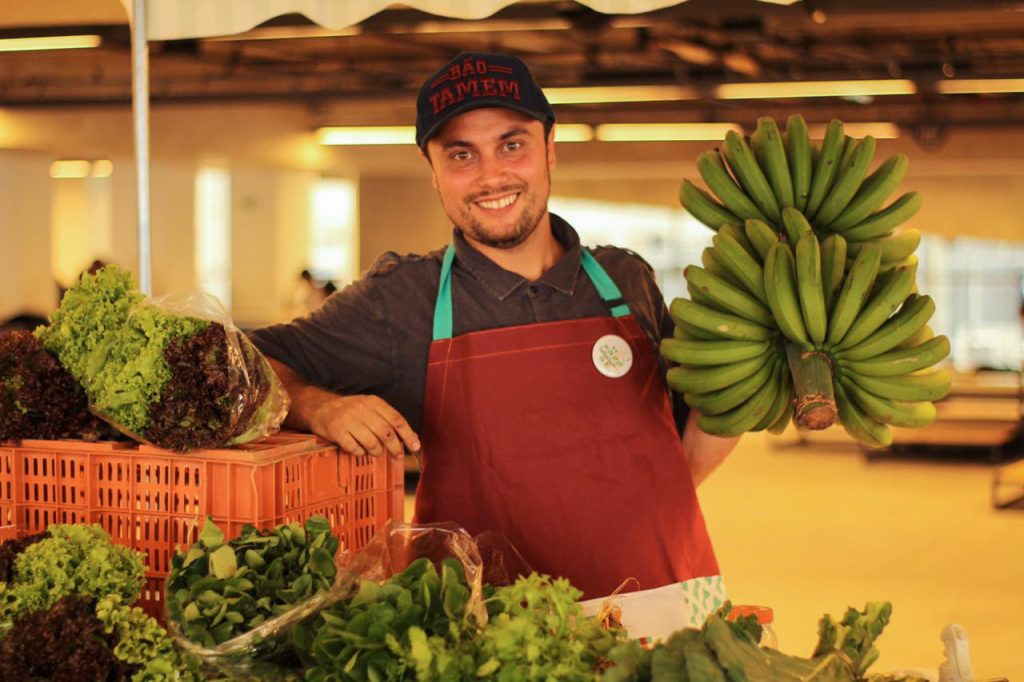 To help spreading the seed of a pesticide-free farm life Arariba Turismo e Cultura DMC  would like to invite you to book your visit for a trasfomational experience with Eduardo at the Sitio Seu Domingos in Parelheiros, São Paulo, Brazil.

Get in touch for more information and your special discount: elisa@arariba.com 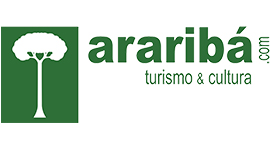