Lessons from the Circle: Reflections on the Brazilian CBT.

In these days of forced isolation, the things I miss the most from my travel experiences now come to the surface of my consciousness through memories and images.

There are many memories, however amongts all of them one dominates strongly. This memory is linked to an image, which tells my story of falling in love with community-based tourism.

This story starts at the beginning of a CBT experience in Brazil when people are asked to form a circle.

THE SHAPE: A METAPHYSICAL VIEW

The circle is not just a way to gather people together.

It is different from a triangle in that it has no top nor bottom.

It is different from a square in that it has neither corners nor opposite sides within itself.

The circle has no predefined start or end points, it shows no leader nor followers, no speaker nor audience.
It endlessly escapes the limitations of time in that it could go around forever.

This is the circle, the specific shape that the communities in Brazil have chosen to welcome the visitors in their territory.

THE MAGIC OF THE CIRCLE

I do not know when this became the norm in the Brazilian community-based tourism environment, and how it has evolved.

However, based on my experience, I know that, apart from being a universal symbol of ancestral meanings, the circle contains other practical and symbolic connotations.

It is a space for freedom in that it does not require roles. When standing or sitting in a circle, everyone has equal rights to speak and they are equally responsible for the flow of communication. Within its limits, respect for each other is the foundation of any interaction. 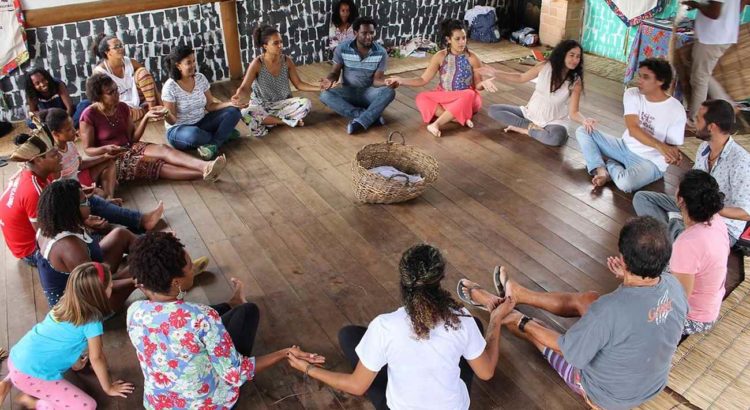 It is a democratic and egalitarian space, in the sense that once you are part of it, you cannot really tell who is the tourist and who is the resident. Beside some obvious occasions -when visiting an indigenous community, for example- you cannot really grasp, simply by the appearance or the colour of the skin, if that individual has travelled thousands of miles to reach their current spot, or has just walked few metres.

In the circle, the traditional tourist distinction between the observer (the tourist) and the object of that observation (the community) is simply erased.
Both parties can be the observers and, at the same time, be observed.
In the circle we are all actively involved and participating, we are all protagonists.
Within its space, the predefined social roles we constantly carry around magically disappear and what is left are human beings!

THE POWER OF THE CIRCLE

The circle is where the relationships are shaped.

Since tourism has become the centre of my academic interest, fully from 2007, my primary focus has always been the relationships.
Tourism is done by people, or better say, by the relationships established between the individuals involved in its activities, and I believe that the relationships we create and maintain in tourism -through our choices as businesses and tourists- shape what tourism is today and what it could be tomorrow. But our choices are based on our values, i.e. the set of believes that guide our actions.

The circle establishes, in a tangible way, the kind of relationships that will take place in the tourism experience that is about to start, which are relationships of proximity and of encounter amongst human beings. Given these premises, it is clear to me that the kind of encounters that happen in a CBT experience is based on a different set of values, which I believe that the tourism as a sector needs to consider and probably incorporate as an integral part of its identity.

This is the reason why, I would suggest looking at the tourism not only as an economic activity but also as an anthropological encounter and asking ourselves which type of relationship we are allowing to happen through the tourism we support.

By asking these questions, we have the chance to reflect on the underlying values and believes that mould our choices and priorities, while we open possibilities for amendments and desirable shift of paradigm.

WHAT HAPPEN IN THE CIRCLE?

Listening and Sharing are the two main actions that happen in any CBT circle, and everyone is invited to embrace them.

In the circle, to listen means to be open and true, as well as to be not judgmental. To share means to make oneself visible, i.e. allow to be vulnerable, to be seen, with no fear to be judged.

There are also the conversations in the circle, the so-called Rodas de conversas, but that happens in another moment. 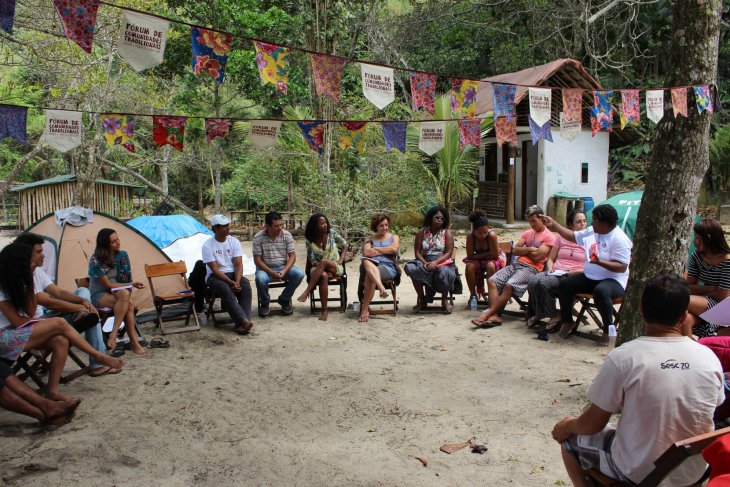 HOW DOES THE SHARING HAPPEN?

In the circular ritual, you might be asked to say something about yourself, or to do something, like a movement or a sound that the others will copy along. You might also be asked to simply express how do you feel in that particular moment, which is, for example, what happened in my visit to the community of Uruguai, Salvador (Bahia) in 2018.

Sharing in the context of this circle is referring to showing our fears, our embarrassing lack of coordinated movements, or simply the effort to get out of the comfortable silence of the external observer role, in which some kind of tourism traps us in.

This sharing is a mutual agreement: we are accepting that we are here together.

A person needs to experience this first-hand, to understand how liberating and connecting that simple act of sharing can be! 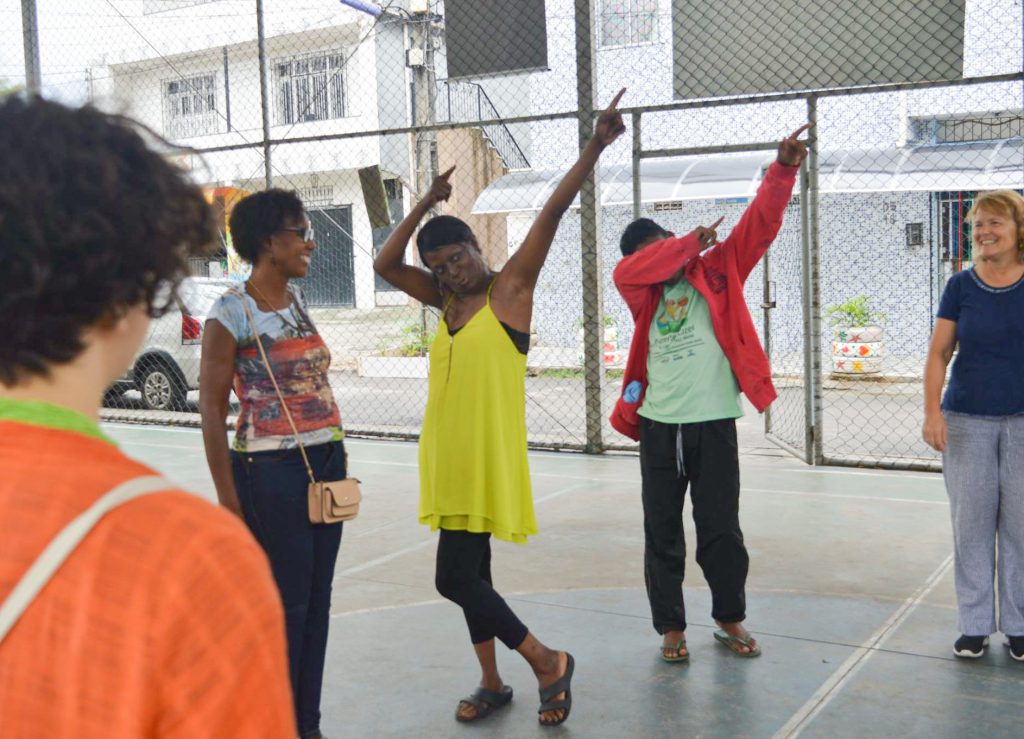 Scenes from the circle ritual in the football ground before starting the tour in Uruguai (Salvador, Bahia city-Brazil), picturing a tourist and a resident performing a movement, surrounded by a Brazilian University Professor, a visiting partner and myself.
Photo credits: Comuni Culturi

WHAT IS THE CIRCLE FOR?

The circle is a safe and close space that brings people physically next to each other, while temporarily annihilating the social difference between them.

To me the circle works as well as a rule setter and, most importantly, as a mind re-setter.

The community is open and welcoming to everyone who has decided to visit. The CBT is a choice that the community has made, and it is embraced with care and commitment by its members. You can feel it in their smile and in the way they make you feel at ease.

However, the community has set some rules. These involve abandoning the modern West-centric superiority and to start listening –free of judgment and full of respect– to the culture and tradition they represent.
The community wants to be seen for what they are, but they are also asking their visitors to do the same: to enter the circle of relationship with them. Within the circle the tourists are asked to be seen, be the object of observation, and share things about themselves on an individual level, as human beings.
The circle is also a mind re-setter because the rules established by the community imply the need for the tourist to reset their approach and gaze: they are guests now.

This is why, in my opinion, the CBT circle is a powerful and revolutionary space, which has changed the way I perceive and experience tourism, and I believe I am not alone. 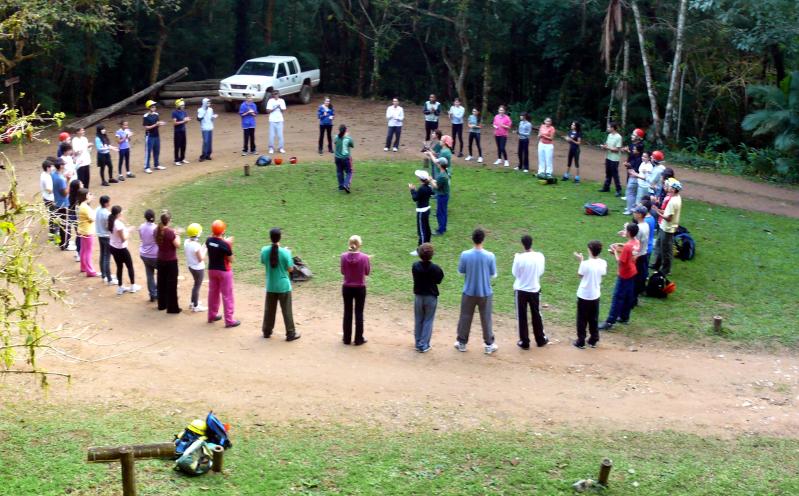 Today, in the peculiar moment in time and space we are in, due to the COVID-19 pandemic, we have been deprived of our relationships. Our own humanity has been exposed and social distance and immobility have been forced upon us.

However, this situation has brought us in other circles, the only ones we currently can be part of, the virtual ones.

We have been participating in many virtual gatherings. Some are squares, other triangles, but there have been many circles as well. In some of these circles we have been listening and sharing, in others, we have also been creating together. And the latter are the real magic ones, in my opinion.

I am now waiting to again join my next physical circle in one of the traditional Brazilian communities, one day. In the meantime, I wish that these new virtual experiences that are raising now could be an opportunity to reflect about how much we still need to form a circle in the tourism industry, to listen and share, and, together create a new reality for our industry from a new resilient and collaborative mindset.